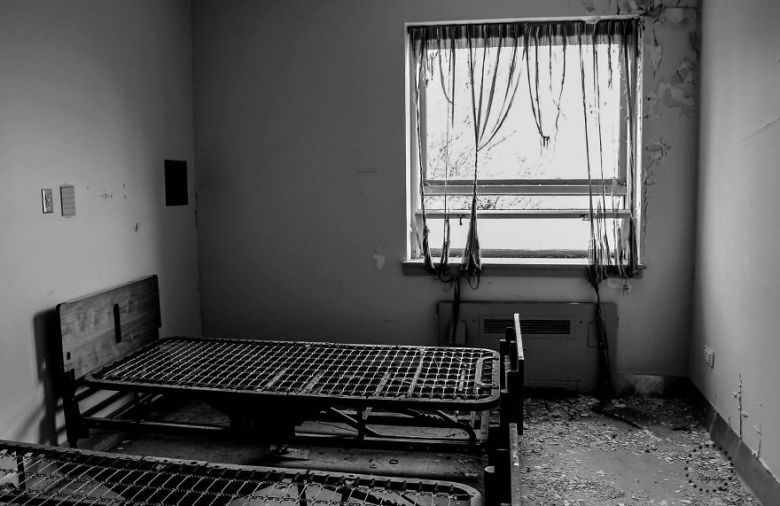 Hi! My name is Arielle. Ever since I can remember I’ve been obsessed with abandoned places. I’ve photographed many, many abandoned homes, farms, schools, even a bunker. But I’ve never photographed a place quite like the old Glasgow MT Air Force Base. Built for the Cold War and abandoned soon after, this place was designed to house over 10,000 military personnel and their families. Since it closed, it’s become a magnet for trouble. Condo associations fight over it and rip people off. Freemen tried to take it over awhile back. Boeing owns and maintains the giant runway and airplane hangers. It’s where they test their secret projects, so you end up seeing all kinds of odd things here! They’re very tight with security so you’re watched wherever you go and must stay out of testing areas. I thought I’d share some photos I’ve taken in various seasons on my visits to the old AFB (now named Saint Marie). These photos are of the old hospital that was only in use for around 7 years. It’s in tough shape now. I first explored it at 11 pm while a full moon rose in one part of the sky and a thunderstorm came on in the other. Walking the pitch black halls with only the flickering light of the thunderstorm and a little light from my cell phone – it was like being in a horror movie. The second time I explored the place was in the daytime, with a bunch of friends and people who said they owned the property (I found out they were Freemen after the fact). It was still spooky but as you can see, I got some decent photos! I hope you enjoy :)
PrevNext
Your Comment
Signup
Log in