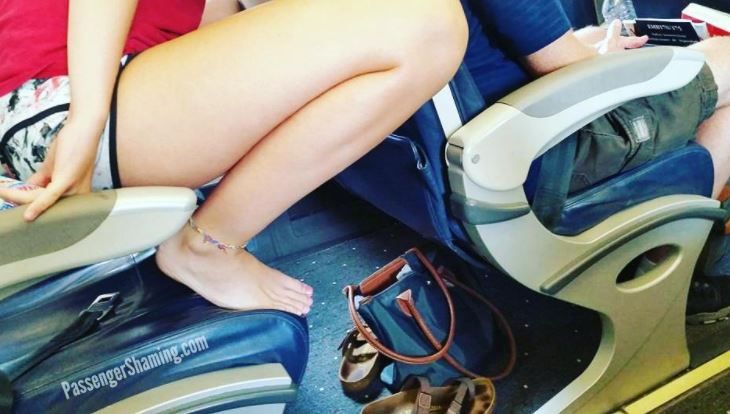 In case you haven’t noticed humans are horrible; especially when you have to travel with herds of them. Even if they aren’t threatening to blow up the airplane, or are having a midair obscenity screaming panic attack that diverts you from Tuscan to Tallahassee, you still have to deal with some people who thinks a “Knee Defender” is a good idea. Now, annoyed travelers everywhere are standing up (once the captain has taken off the seatbelt sign) and they aren’t going to take it anymore! People have begun posting candid photos to Facebook and Instagram of their fellow passengers being the rude, inconsiderate that we know they are. Putting your feet in someone’s face, and taking your clothes off in front of everyone.The Passenger Shaming Facebook page was started in January of 2013 by Shawn Kathleen, a disgruntled flight attendant who was sick of what she saw on a daily basis. Having posted many of these photos in revenge, she is now very gruntled.The page has been popular, with nearly 500,000 Facebook fans and hundreds of passengers submitting photos of the insanity happening in the unfriendly skies.