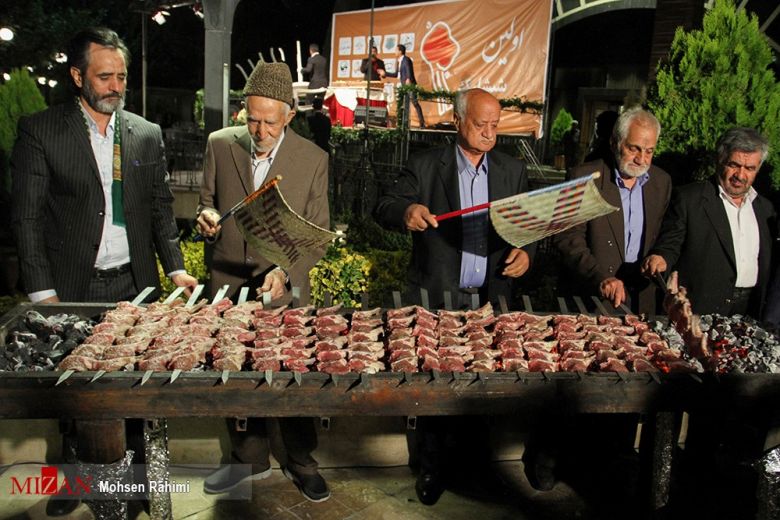 Shashlik or shashlyk is a dish of skewered and grilled cubes of meat popular in Iran, Eastern and Central Europe (Russia, Ukraine, Belarus, Romania, Bulgaria, Croatia, Poland, Hungary), the Baltic region in Northern Europe (Latvia, Lithuania, Estonia), the Caucasus (Armenia, Azerbaijan, Georgia), Central Asia, Afghanistan, Israel, Iraq, Mongolia, Morocco, Pakistan, Turkey, and other places.Shashlik (meaning skewered meat) was originally made of lamb. Nowadays it is also made of pork or beef depending on local preferences and religious observances. The skewers are either threaded with meat only, or with alternating pieces of meat, fat, and vegetables, such as bell pepper, onion, mushroom and tomato.The word "shish" means skewer. The word "shishlik" is literally translated from Turkic languages as "skewerable". Even though the word "shashlyk" was borrowed from the Crimean Tatars by the Cossacks as early as the 16th century, shashlik did not reach Moscow until the late 19th century. From then on, their popularity spread rapidly; by the 1910s they were a staple in St Petersburg restaurants and by the 1920s they were already a pervasive street food all over urban Russia.While it is not unusual to see shashlik today listed on the menu of restaurants, it is more commonly sold in the form of fast-food by street vendors who roast the skewers over wood, charcoal, or coal. It is also cooked in outdoor environments during social gatherings, similarly to barbecue in English-speaking countries.
PrevNext
Your Comment
Signup
Log in