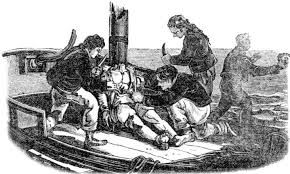 The Essex
We all know the tale of "Moby-Dick." The story is actually somewhat similar to that of the whaling ship Essex, which sailed the Pacific in 1820. In "Moby-Dick," nature showed man it was not to be trifled with, in the form of the Great White Whale. The Essex also was pretty much ravaged by nature, and a sperm whale even started the whole thing by striking the ship, causing the 20 sailors to move to three small, open boats, with only a ration of half a pint of water and three ounces of biscuit a day. Which -- during the course of their 90 days at sea – meant men quickly turned to drinking their own urine and eating the internal organs of their dead comrades. Eight men survived and were found in the two remaining boats among bones and human remains. One survivor included the captain, Nantucket native George Pollard Jr., who had helped to kill and eat his own cousin -- the young boy had drawn a bad lot, a "custom of the sea" to help decide who would be murdered for meat, to sustain the others. Showing even more insanity than he did in the boat, however, Pollard decided the next year to captain another ship. Yet again, Pollard's ship was wrecked, but luckily the crew was rescued before resorting to cannibalism this time. Pollard stuck to being a night watchman on solid land. The wreck of his second ship was discovered in 2011.