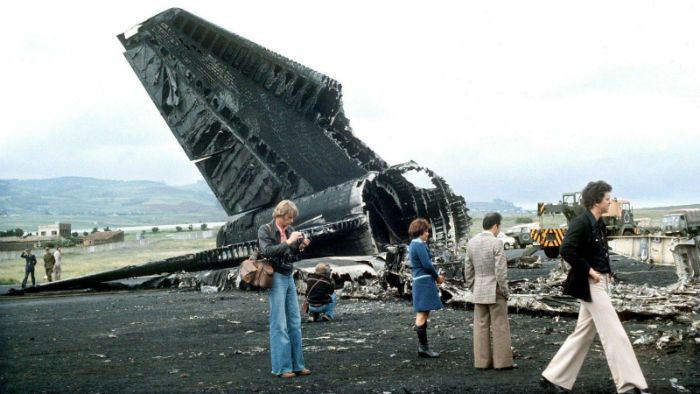 The KLM began to take off down the runway. They came in view of the Pan Am just as the Pan Am reached the fourth exit. The Pan Am pilot took a hard left onto the exit, and the KLM pilot hurriedly attempted to take off. Because of their enormous weight, being full of fuel, and their steep takeoff angle, their tail scraped along the runway, and the bottom of the KLM and its landing gear hit the upper right side of the Pan Am, tearing the top off. The KLM plane was momentarily airborne, but it had lost use of two of its engines, and it crashed back onto the runway. The enormous fuel fire killed everyone on board. 61 people on the Pan Am, including the flight engineer, ultimately survived. Conversations with air traffic control became much more standardized, avoiding confusion such as whether the KLM had clearance to take off, after this accident. Crew resource management, considering the crew to be a team and downplaying the importance of the captain, has also been emphasized to avoid situations like that of the KLM cockpit.