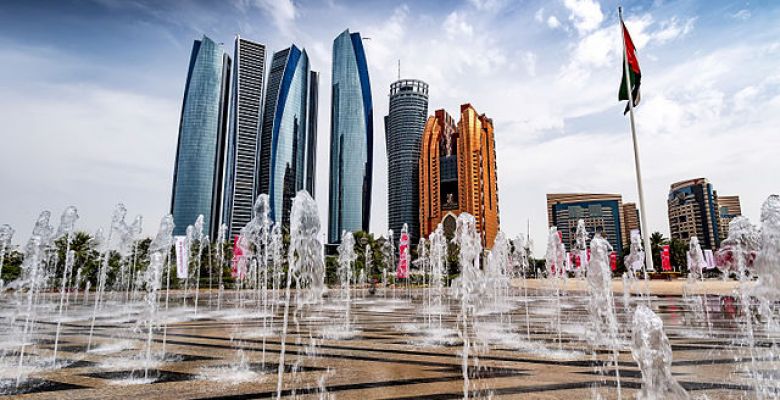 The United Arab Emirates’s capital, Abu Dhabi, seems to run out of time to attract the attention of tourists from all over the world who daily land in Dubai for the luxury of Dubai. What these travelers do not know is that Abu Dhabi is the richest city in the Emirates, the one that contains the most Arab reminiscences and that manages the fate of the country. The “Desert Eagle,” as its inhabitants call it, holds much less scenographic surprises than the skyscrapers and aquariums of the neighboring emirate, and offers tourists a less Western view of the Muslim world in this part of the globe.

The charms of this increasingly westernized and ultra-modern place in the Persian Gulf are beyond its large and brand-new buildings. Behind this mirrored universe are sand dunes that hide lost oases in the middle of the desert, where a vast number of camels and a few “places,” as the natives of this country created by Bin Sayed in 1971, call themselves.

In the midst of these ripples that dot the country in an undefinable diversity of colors – from yellow to red – is the capital Abu Dhabi, a city planned and built like the great American cities, with symmetrical streets and avenues that form perfect blocks And make circulation very simple.

The avenues, in addition to names in Arabic, have Western numerals, which makes it simple to know that the parallel to Corniche St. are the even avenues and the ones that are perpendicular are odd.

In this city, the offer of hotels may seem scarce for some tourists and many offer luxuries that cost dearly. Hotels are usually rated between three and six stars, but in the regions of Shangri-La, Fairmont, Traders, and Souk Qaryat Al Beri you can find more affordable rates.

The tourist who likes to enjoy the local food will also be surprised by the complete absence of typical restaurants. But Abu Dhabi still represents far more to the United Arab Emirates than Dubai. There, the visitor finds a more traditional way of life and can experience the culture of the region a bit, since the capital was the first to modernize, but bet on a more traditional structure and structure.

Largest hotel suite in Abu Dhabi has cinema and spa
The 2,099 m² Royal Suite at the St. Regis Saadiyat Island Resort in Abu Dhabi is considered to be the largest hotel suite in the United Arab Emirates and includes a movie theater, games room, spa and sauna, outdoor area and pool. The room occupies two floors of the west wing of the resort, and the daily can reach $ 35 thousand.

Guests are welcomed with a Steinway piano in the living room, with sweeping views of the Arabian Gulf. Earth tones like beige and sand, blended with blue, are used to decorate the suite, evoking the hotel’s maritime and desert environments.

The dining room has 12 seats and meals can be ordered by hotel service. Down the spiral staircase, you reach the master bedroom, which occupies the entire lower floor and includes a closet, dressing area, spa, sauna and a bathroom with a view of the sea, double shower and bath.

Also known as one of the largest and most luxurious suites in the world, the Royal Penthouse Suite at the President Wilson Hotel in Geneva, Switzerland has 12 rooms, 12 bathrooms, fitness room, Steinway piano and private elevator. The terrace is 1,680 m². The cost for one night? Something close to $ 65K.

And Maharajah’s Pavilion at Raj Palace in Jaipur also has 1,486 m² and includes a private lounge bar, spa, rooftop pool and jacuzzi, library and a museum with a collection of real artifacts.