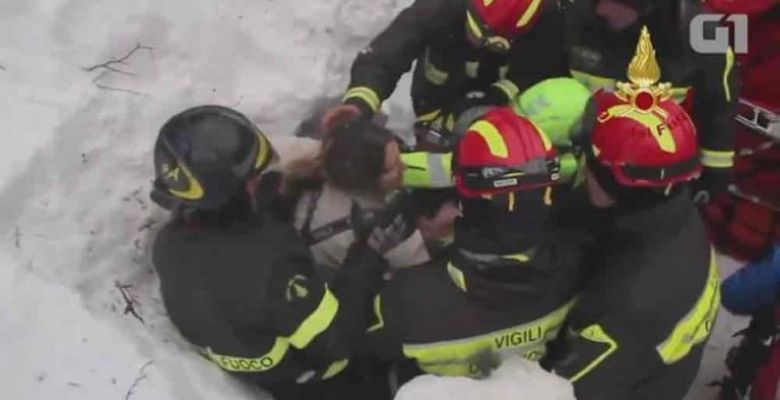 Ten people were found alive at the hotel hit by an avalanche at a ski resort in the town of Farindola in Abruzzo in central Italy, according to firefighters. Among the survivors, there are three children. The avalanche occurred late on Wednesday (18), after the region was hit by at least three earthquakes with a magnitude greater than 5.

Firefighters reported that up to now four children and one woman have been taken from the rubble of the Hotel Rigopiano. Two of the survivors are mother and son – see rescue video above – who were taken by helicopter to the nearest hospital in Pescara.
“They are alive and we are talking to them,” Luca Cari said in a telephone interview with Reuters.

Earlier, when the number of survivors found was six, “Corriere de la Sera” claimed that the survivors would be three men, three women and two children. According to initial information, they would be in the attic of a local kitchen. Apparently, they managed to light a fire to keep warm.

The good news comes after intense searches in an extremely difficult condition: the temperature well below 0 ° C. The team, reinforced by brigaders from Piedmont, Lombardy and Veneto, need to dig a thick layer of snow mixed with many debris.

On Thursday, two officials, who were outside the hotel, were rescued and three bodies were removed from the rubble. Rescue workers were still searching for at least 27 missing, including children.

A video released by the BBC shows firefighters facing a blizzard to get to the hotel, which only happened on Thursday night, hours after the avalanche. Dogs and helicopters are used in searches. Images taken by rescuers show pieces of furniture, windows and other objects destroyed by the avalanche.

Gampiero Parete and Fabio Salzetta are the survivors who remain hospitalized. They took shelter in a car until the arrival of the aid, around 4 o’clock this Thursday. In the car, they sent messages asking for help with their phones alerting them to the avalanche as well as some hotel guests.
Parete, a restaurant cook, had gone to the woman to get a medicine in the car with the couple’s two children, aged 8 and 6, in the hotel.

“As I walked to the hotel, I heard noises and crackles and I saw the fall of the mountain on top of the hotel, the snow covered me, but partly I tried to go inside, but I risked getting stuck. To a branch and got back to the car, “he said, according to” Corriere de la Sera. ” The wife and children are still under the rubble.