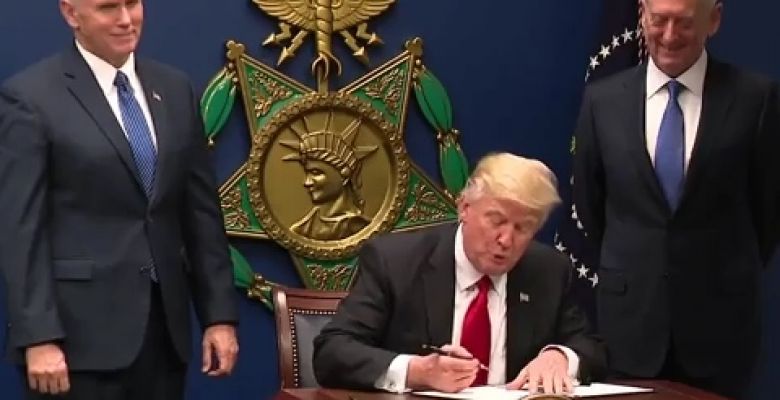 US President Donald Trump said on Thursday he wants to strengthen the country’s nuclear arsenal to ensure the US is in the lead after falling behind in its atomic weapons capability.

In an interview with Reuters, Trump also said that China could solve the North Korean national security challenge “very quickly if they wanted to,” intensifying pressure for Beijing to exert more influence to control Pyongyang’s increasingly aggressive actions.

In his first comments on the US nuclear arsenal since he took power on January 20, Trump declared that the US “lagged behind in nuclear weapons capability.”

“I am the first one who would like to see everyone, no one to have nuclear weapons, but we will never be behind any country, even if it is a country friend, we will never be left behind in nuclear power.”

“It would be wonderful, a dream if no country had nuclear weapons, but if countries do, we will be at the top of the group,” Trump said.

The new arms limit treaty, known as New START, between the US and Russia requires that by February 5, 2018, the two countries limit their stockpiles of strategic nuclear weapons to equivalent levels for ten years.

The treaty allows the two countries to have no more than 800 land-based and submarine ballistic missile launchers and heavy bombers capable of carrying nuclear weapons, as well as other egalitarian limits on other atomic weapons.

Analysts have questioned whether Trump wants to nullify the New START or whether to start using other warheads.

In the interview, Trump called the New START an uneven agreement. “Just another bad deal that the country did, START, the deal with Iran … We’re going to start making good deals,” he said.

The US is in the midst of a $ 1 trillion dollar 30-year modernisation program for its ballistic missile submarines, bombers and land-based missiles, a cost many countries can not afford.

Trump also complained that Russia’s use of a cruise missile is a violation of the 1987 treaty that prohibits Russian and US ground-based intermediate missiles.

Asked if this would be the subject with Putin, Trump said he would do it if and when they meet. He said he had no meetings with Putin.

Speaking at the Oval Office, Trump said about North Korean ballistic missile tests: “We are furious.” He said accelerating an anti-missile system to the allies Japan and South Korea was among the possible options.

“There’s talk about a lot more than that,” Trump said. “Let’s see what happens. But the situation is very dangerous, and China can end it very quickly in my opinion. ”