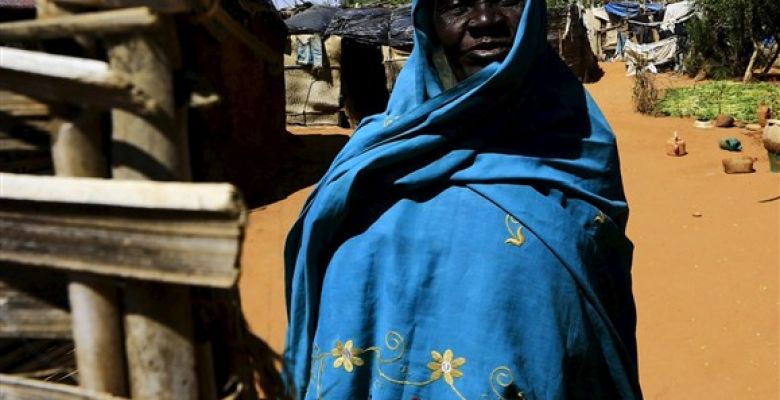 “This is the first time I’ve come for food,” says Myakong Mar. “I did not know if I would be dead on the way here.” Having emerged from the swamps of southern Sudan after spending months in hiding, Mar, 42, a mother of four, runs her fragile fingers through the grains of sorghum. Today she will be able to feed her children with something other than aquatic plants.

Three months ago, as clashes between government and opposition forces resumed in the town of Padeah, in Unity State, Mar fled into the woods near the city. Afraid to leave the swamp, fearing to be killed by government troops, she and her children have been living ever since anything they can get out of the water. When her 5-year-old son had to be hospitalized for malnutrition, Mar decided it was time to get out of the woods.

After walking for two hours in the water to chest height, returning to her city, she waited in line to receive food distributed by the World Food Program (WFP). But Mar said that as soon as he received the food, he would return to the swamp. The county where she lives, Leer, is one of the hardest hit areas of the civil war that erupted three years ago in South Sudan. Last month the United Nations and the government of Southern Sudan declared a state of hunger Widespread in the counties of Leer and Mayendit. Authorities say 100,000 people in the region are at risk of dying from starvation, with 15,300 in Padeah alone. Although hungry, many Padeah residents prefer to stay in the bush for safety.

“Government soldiers arrive, kill us and steal our food,” explained John Chol, who lives near the city. According to him, people prefer to live in the swamp than to risk attacks and rapes. Lulu Yurdio’s family fled to the river a few months ago. A torn shirt covers the body of the 12 year old boy. The last time he ate anything was five days ago. “I’m hungry,” he said, his eyes filled with pain.

“I never have food, I’m always hungry.” In charge of finding food for his parents and two brothers, he had walked two and a half hours to reach the PAM distribution post. He said his family is afraid to leave the swamp. But government officials in Leer said the “big guns” have already left the area and that the situation is now stable. “People can move freely,” said Marco Wictia, Dhorwang County Commissioner. “See for yourselves.” On Wednesday, the UN said up to 114,000 people have already received food aid and more food distributions are planned for the coming days.

Local women left the dispensing station balancing white bags of food on their heads, almost as big as themselves. On Wednesday (1), on his first visit to the hunger-stricken region, UN humanitarian coordinator for Southern Sudan, Eugene Owusu, appealed to the Padeah community and government officials to People can start rebuilding their lives. “We can play a helping role,” Owusu said. “But we can not stop the fighting. People need to go back to their homes.”

After years of conflict, however, the Padeah community is still scared. “If you get out of the woods, you’re going to die,” Mar said. She picked up her packet of food and went back to the swamp.