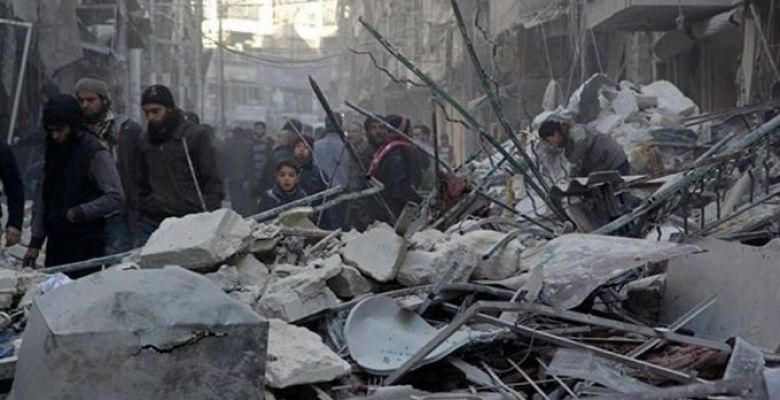 Hares of civilians fled on Saturday (4) from the air strikes and bombings of the Syrian army, supported by Russia, in its advance on the group Islamic State (EI) in the north of the country.

A week ago, “more than 30,000 civilians – mostly women and children – fled,” the Syrian Observatory for Human Rights (OSDH) reported, adding that the army has resumed several EI villages in the eastern province of Aleppo during the offensive Which continued on Saturday.

Most of the fleeing civilians are headed to the region of Manbij and its surroundings, currently under the control of a Kurdish alliance of the Syrian Democratic Forces (FDS), allied to the United States. Manbij lies in the eastern part of the Aleppo province.
In January, government troops, backed by the Russian Air Force, launched an offensive to oust extremists from the Aleppo EI. Since then, they have resumed 90 localities in the east of that province.
In cars, motorcycles, vans, or pickup trucks, carrying some belongings, countless civilians tried to seek shelter.

With a tired face and long lines, the IDPs waited for permission from the Manbij Military Council to enter the city. The SDS checks that no extremists have infiltrated them.

“The number of IDPs is already over 40,000, and it is increasing by the fighting between the regime and the Daesh [Arabic acronym],” Ibrahim al-Quftan, the co-president of the Manjib civil administration, told AFP.
“Their situation is very complicated,” he added.
Violent fighting
“We leave our homes with nothing, no fuel, no bread. Our children are hungry,” said Jumana, who ran away with the two children of her village, dominated by the EI.

The children “still panic when they hear the noise of airplanes,” said the 25-year-old refugee in Jarufiya, near Manjib.
EI members occupy much of the southeast of the province of Aleppo.
In January, Bashar al-Assad’s regime troops, backed by Syrian and Russian aviation, launched an offensive to expel extremists from the province completely.
Saturday’s fighting was followed by violence, reported the OSDH, which did not give a record of casualties.

According to the official Sana news agency, government forces have reconquered 15 new localities of the province.
The Army’s goal is to reach the town of Al-Jafsa, 20 km further north, where there is a water pumping station that feeds the provincial capital of Aleppo, and the EI has left of service for six weeks.
According to the OSDH, today, military troops were 13 km, or 14 km, from Al-Jafsa.

In western Manbij, other protagonists had fought since Wednesday (1st): the Syrian rebels, backed by Turkish soldiers, faced the SDS.
Turkish soldiers and their allies want to seize Manbij, and expel the Kurds and allies, before proceeding to Raqa – the main EI stronghold in Syria – to take part in the battle and secure a large area under his authority in northern Syria.

Turkey participates in the Syrian conflict to ensure the security of its border with Syria and prevent the creation of a belt controlled by Kurdish fighters in the north of that country. They are considered terrorists by the Turkish government.

Bombing dead
On Saturday, a Syrian military plane crashed on the Turkish-Syrian border in Hatay province, the Turkish agency Anadolu reported. The insurgent group Ahrar al-Sham took over the attack, while the Turkish government justified the fall from bad weather.
In the old city of Palmira (center), which was resumed on Thursday (2) by the Army after it was later expelled from the EI, de-mining operations were carried out, while Syrian and Russian airplanes bombed the EI in the north and east of the City.

Fighting since January to reconquer this millennial city has left 115 dead on the side of government forces and 283 among extremists, according to the OSDH.