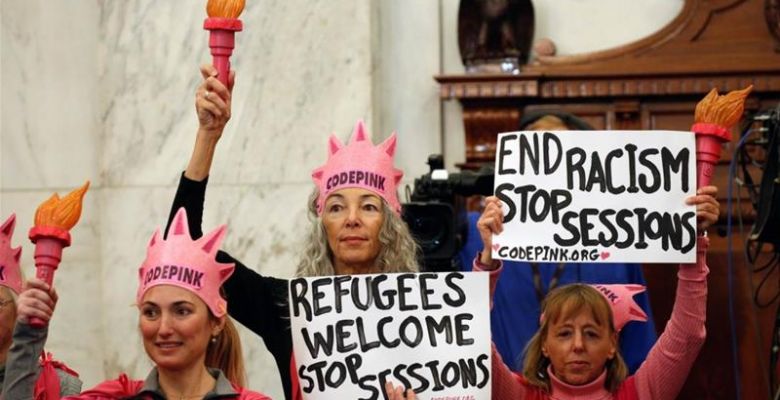 A Washington jury has convicted three people of being disruptive at US Attorney General Jeff Sessions' confirmation hearing.

One of them, Desiree Ali-Fairooz, 61, was convicted on Wednesday of disruptive conduct and demonstrating on US Capitol grounds during the hearing of President Donald Trump's nominee on January 10.

Fairooz, a member of the Code Pink activist group, let out a sound that court documents referred to as laughter when a senator said during the hearing that Sessions had a record of "treating all Americans equally under the law".

The New York Times reported that in a filing, prosecutors said she "let out a loud burst of laughter, followed by a second louder burst".

When police tried to escort Fairooz from the room, she "grew loud and more disruptive, eventually halting the confirmation hearing," prosecutors said.

In a press release reacting to the verdicts, Code Pink said Fairooz, who attended the hearing dressed as the Statue of Liberty in pink, "emitted a reflexive gasp".

The statement said the activist described the noise as “spontaneous" and "an immediate rejection of what I considered an outright lie or pure ignorance".

Fairooz is a well-known face at Capitol Hill.

She was charged with disorderly conduct and assault on a police officer in 2007 after she waved blood-coloured hands in then-secretary of state Condoleezza Rice's face at a congressional hearing and shouted "war criminal" in protest against the US intervention in Iraq.

Tighe Barry and Lenny Bianchi, two other members of Code Pink, were convicted on Wednesday on two separate charges of parading or demonstrating.

They appeared at the hearing dressed as members of the Ku Klux Klan, in what the group described as "parody designed to highlight Sessions' racist history".

The three protesters each face up to 12 months in jail, $2,000 in fines, or both, according to US media.